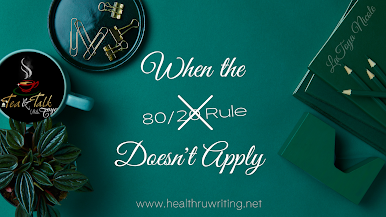 Remember the 80/20 rule mentioned in the Why Did I Get Married movie? Okay great! I will be talking about that relationally but not necessarily from the angle mentioned in the film. I learned a great lesson where this rule is concerned.  Great teachers imparted wisdom nuggets; others cost to obtain.  I was hitting my head repeatedly, eventually armed me with ways to stop injuring myself in that manner.  I was once a person who chose the background. No, I wasn’t humble; I did not believe in my ability to make my moves. However, I learned a lot that would be beneficial later down the road. I thought it was humility for some time; there were deeper roots that resulted in my doing this, I later discovered.

Well, I worked on many projects with various people. People noticed my get it done in an organized fashion mentality and wanted to work with me. I was precise with my work, I looked up what I didn’t understand, and I made it happen. I was the person to share a vision with if you needed someone to run. After running so much for so many different people, I found a common thread. It all ended in my demise, taking the blame for the breakdown, being ostracized, and ultimately made to feel as though I was the most complicated person on earth. It took me a while to process that someone made their suicide attempt about my decision to walk away from what they were doing. Leaders in an organization, those who led morning prayer, all stopped speaking to me because of the poison this person fed them. There was never any accountability for their role; it was always me. I can honestly say, rarely did I initiate, but I could finish. Unfortunately, the initiation was never spoken of, only my finish.

I dealt with attitudes before anyone caught mine; I dealt with intimidation, sabotage, and having my gifts minimized by people who I trusted at the time. I recall moments people gave me a particular task because they wanted me to fail. Sometimes I would see the plot twist in my dreams, which helped me escape the trap set. That only made the anger brew even more aggressively. I was putting in 80% to their 20%, and that was problem #1.  The 80/20 rule does not apply here. Under no circumstance should you ever give more to another’s vision than they give.  I kept my word, and I exceeded my part, but I wasn’t a pushover, and that led to a breakdown. I hit my head many times in this manner; it became hard to get me to work with anyone on anything. As I healed, I began building my table. I was no longer going to sit at a table just because I was invited only to be the topic of conversation once I left. I was not valued, and it was time for me to make my way. Today, there are many people with a misconception of who I am because of something someone I worked with told them. No one has any discernment. One day I am praised, and the next, I am crucified. Come on, people!
I gave my time, resources, finances, and knowledge. I missed sleep perfecting that which concerned someone else, and, in the end, the visionary discarded me.

People will put a cap on your capacity by measuring your potential against theirs.

Thank you for reading this article. I hope the tips shared are beneficial to you and apply them when faced with similar situations. It is okay to say no if it does not work with your core values. As someone cleverly put it, “do not allow mercy to distort discernment.”